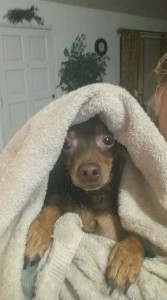 Meet Scooter!  He owns our front office team member Lori B.   As you can see, Scooter loves oatmeal baths!

Scooter is an 8 year old Deer Head Chihuahua.  Lori rescued Scooter when she found him abandoned behind a bush. He was only about 3 weeks old at the time.  He is a mama’s boy who loves Cheetos and most people food and he loves to chase his brother Walter the cat.

Chihuahuas are from the Toy Group of dogs.  They are known to be Graceful, Charming and Sassy.  They come in two varieties, long and smooth coat.  Because of their small size, they require little exercise and are good city dogs, but can be sensitive to cold temperatures.

The breed derives it’s name from the Mexican state of Chihuahua, where the earliest specimens of the breed were found.  The Toltecs, who existed in what is now Mexico as early as the 9th century AD, possessed a breed of dog called Techichi.  This breed, regarded as indigenous to Central America, is the progenitor of the Chihuahua that exists today.

It is assumed that the small size of the modern Chihuahua results from a cross of the Techichi with the small hairless dog brought from Asia to Alaska over the land bridge that is now the Bering Strait.

Pictures of dogs resembling the modern Chihuahua appear in ancient paintings in Mexico.